I mentioned in my last post that one of my goals at the moment is to lose weight. Yup, I've now joined the list of pretty-much-everyone who at least says they need to do that. So far, it's been going all right, in that I've lost a pound or so per week. When I mention that tiny figure, the typical response has been, "That's how you're supposed to lose weight if you want to permanently keep it off!" Great! I look forward to that permanent weight loss, as I'd sure love a pizza right about now, and knowing that I can soon eat said pizza without worry about gaining back that permanently-lost pound is a motivating thought...

I've rarely had a job that kept me mobile. Sure, being a reporter kept me walking, at least when I worked in Indianapolis, but even then I wasn't in shape. In fact, I'm not sure I've ever really been in shape, at least since my first year of college or so. 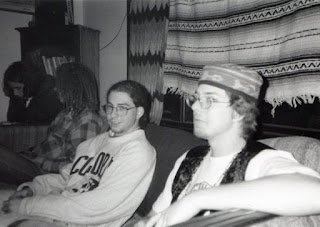 Old photo taken of me in college, probably 1995 or so. I'm on the right. I'm sure there are better pics to show my weight, but keep in mind that was an era when we shot photos on film, and I have never scanned in all that old stuff... 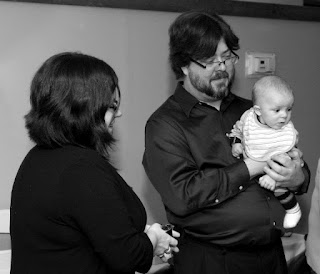 Photo taken of me in the past year. I'm on the right-ish in this one too. Technically the baby is on the right...

It's kind of depressing to look back at those college photos and see how skinny I was (and kid-like too, it's amazing what 10-20 years will do for photo-perspective.) Then again, it's not like I don't have a choice in the matter. I've chosen to live a largely sedentary life, eat like I want to, and not worry about it.

Thing is, packing on all those pounds really does impact your health. Imagine that! One initial motivator was the desire to keep active for Jeffrey, so we can go out and do stuff throughout his childhood without me being the waddling-down-the-road parent with his kid smiling and running away. Not that I waddle, exactly, it's more of a slow-walk-with-an-imaginary-timpani-playing...

Also, there was a health thing at work. Participants all paid $20 to join it, and we're now keeping track of our weight loss over the course of twelve weeks. The person who loses the most, percentage-wise, gets the jackpot! I figured it was as good a time as any to get started, especially since both my office and apartment complex have pretty-decent gyms.

So, I started working out! Those first few weeks were truly agonizing. I'm sure anyone who's gone 15ish years without any real physical activity outside of the occasional hike in the woods can attest, starting a workout regimen is painful. It is true, though, that it gets easier after a couple of weeks. After probably the third week, I actually looked forward to spending a half hour on the bike, and then another 15-20 minutes using the weight machines. It was pretty awesome! I'd feel quite good after the workout, probably the best I've felt physically since high school.

Then I blew out my lower back.

One of the other motivating factors was caused by me suffering severe lower back pain on Thanksgiving, and having to go to the Emergency Room. It sucked! I could literally not stand up, and was trapped in bed for more than an hour. I thought that was as bad as it would get, until a few weeks ago, when I was drying myself off one morning after a shower and suddenly felt what seemed like two of my lower discs sort of "shift", and then feeling such an intense pain that I crumpled in the tub, unable to move, get up, or walk. Sarah got me to the bed, and I spent the next six and a half hours trying to stand up before finally giving in and calling an ambulance. I was eventually admitted to the hospital, and spent about a day there before a combination of drugs and time got me mobile again.

Long and short of it, I've got two discs that are bad, and they're touching my Sciatic nerve. So, besides being old(er) and fat, I can now talk about my Sciatica (something which, interestingly, has been a term in use since the 1400's, at least according to Wikipedia!)

Unfortunately, it put a damper on my gung-ho workout revolution. I can't say for sure that suddenly working out caused this, but it definitely didn't help. A nurse at the hospital told me that she's seen many a patient sent there due to back problems caused by fat people deciding to start working out, and that I should "work my way up to it." In other words, "I'm not saying your too fat to be in a gym, but perhaps you should try walking around the block a bunch first..."

It kinda sucks, but pain has a way of forcing you to re-prioritize things.

X is the amount of calories you take in, Y is the amount you should take in based on your weight and height and physical activity, and Z is magical weight loss (assuming that you've been eating Y + N, N being "a hell of a lot more calories than you should, pizza-boy.")

A is the amount of time spent playing Mass Effect 3, B is the number of pizzas consumed in an average week, Z is the number of weeks spent eating pizza and playing video games, Q is your physical activity level, C is your age, M is number of years spent working at a desk and U equals how fat you are.

(incidentally, for a real equation on weight loss, I've discovered the Harris-Benedict equation, which will totally win me money during a game of Jeopardy! someday.)

I have been eating less, and eating much better. Since I stopped working out a few weeks back due to back pain, I've continued to lose weight, mostly due to the dramatic eating-habits-change of, oh, say, several fewer pizzas per week, eating cream of wheat and raisins for breakfast instead of fast food, forgoing a fattier lunch in favor of a basic veggie-and-cheese sandwich, and some other basic changes.

My goal is to keep losing weight until I'm somewhere down to 170-180 lbs or so. That's still higher technically than my ideal weight, but screw that.

Thanks for reading! I'm not sure what my next post will be about, we'll just have to see what strikes my fancy.

P.S. - Thanks to Tim for motivating me to write in my blog, since blogging means actually writing something.


P.S.S. - Incidentally, the title of this blog post came from a comment made to me by one of the ambulance personnel who had to haul my heavy self to the hospital. He said, "You know the American Diet? Yeah. You've got the American back." It struck me as a pretty awesome thing to say to someone being rushed to the hospital. Incidentally, it's highly likely that the ambulance personnel will have the American back too, if he doesn't already, as, while he was quite strong to be able to haul me into the ambulance, he had quite a few pounds on him, too...