Pizza and Video Games: Samurai Beatdown for the PS Vita 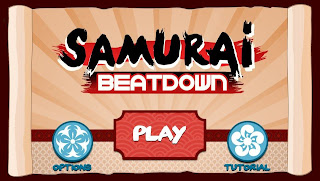 Slash your enemies to the beat, earn points, build up combos, and unleash the fury in this fun mobile/portable game. Samurai Beatdown features catchy music and simple but fun gameplay, and is one of the best games currently available on the Playstation Mobile platform.

Samurai Beatdown is a quirky and simple rhythm-based slash-'em-up from the UK-based Beatnik Games. This title is a standout in the initial slate of games available on the relatively new Playstation Mobile platform, which is Sony's latest attempt to offer inexpensive and quick mobile-style games in a specially-branded store to compete with similar platforms by Apple, Google, and others.

You don't control how fast your samurai runs; rather, the background scrolls by while enemies slowly move toward you. Once you get within range, you hit one of two touch-sensitive buttons on your screen and slash either left or right.

The trick, though, is that Samurai Beatdown isn't really a fighting game. The whole "slash and kill" mechanic is a graphical overlay to what is actually a simple beat-matching system in which you are graded by how well you time your button presses to the music: pressing off-beat earns you a poor score, while matching the beat earns you the most points and builds up a Frenzy meter that you cash in to enter a special mode where you are invincible and earn additional points per enemy.

What really sets this game apart from others in the mobile space is the cool electronic/techno music. I loved it! It fit with the samurai theme well, and featured enough diversity to not get stale. Additionally, the graphics are quite nice for a simple mobile game, and look great on the PS Vita.

One of the few negatives I'd say about this game is that when the screen switches into Frenzy mode, it tends to hitch up a bit, at least on the PS Vita. This caused me to get hit once or twice before I could get back into the beat. Additionally, this game isn't particularly long, but that's fine! For the inexpensive price it's being offered, you can drop a buck and play this game for a fun afternoon or train/bus ride and feel like you've gotten your money's worth. Replay value also comes from trying to beat your score and get a better grade on each level. Overall, this is an easy recommendation for someone looking for a quick mobile-styled game on their PS Vita or other PS Mobile device. Fun!

*The current list of Playstation Mobile-certified devices includes numerous Sony and Xperia tablets and phones, and can be found here.