The Residents at the Institute for Contemporary Arts, February 12th, 2013

The Residents are one of my all-time favorite bands, in part because few people I know can tolerate them. They really know how to push people's buttons in a way that I find extremely amusing.

For forty years now they've been making what might be some of the strangest rock music ever created. Forty years! Even after all this time most bands can't get near as weird as them. They remain half performance art, half rock group, performing songs that tend to be full of strange characters telling stories, deconstructed pop anthems, nursery-rhyme-like melodies and a willingness to go to some pretty dark places. 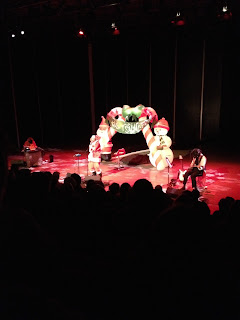 This is the second time I've seen The Residents in Boston, and the third time overall. I first saw the band for their Wormwood Tour around 1999, Since then, their crowds have dwindled a bit, but it's not like they were ever huge to begin with. They remain outsiders with a small but passionate fan base, large enough apparently to keep them employed and making new music decade after decade. I saw them in March 2011 as well for the Talking Light tour, at the Somerville Theater. That was a perfect venue for them, with its historic, classic stage. The show itself featured several long stories set to music, and was really great.

This time the venue was the Institute of Contemporary Art in downtown Boston. I have to admit that I expected the venue to be a bit better than it was. It was a very dry and boring stage, set in the lowest part of the large cube-like room, with rows of seats set above the stage, climbing higher as it went back. There was little decor to accentuate the band, and since The Residents had a very sparse stage this time around, it felt very empty in there. Additionally, the sound system wasn't all that great, and became a bit cheap sounding and distorted at times. That said, the place was packed, and anyplace that'll have The Residents is good enough for me!

The show itself was a mixtape affair showcasing the band's music throughout the decades, in celebration of their forty years of music. Dubbed the "Wonder of Weird Tour", this version of the band is their current stripped-down "power trio" consisting of "Randy" on vocals, "Chuck" on MIDI/keyboards/iPad/beats, and "Bob" on guitar. "Randy" remains his cantankerous, funny self, and did really well on vocals last night. "Bob" has a knack for playing guitar in a way that I just love, soaring and simple, sinewy, strange, and creative at every turn. His playing defies expectation, and is one of the best reasons to see the band. 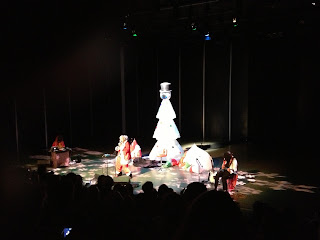 The Residents would play a song or two, and Randy would tell a story about their history, sorta. The Residents have always made up their history as often as they've relayed it truthfully, so it's hard to know how much of it actually happened. Certainly the bit about auditioning for the role of the Donkey in Shrek is made-up, as was the unusual phone call from someone watching Randy's cat Maurice.

The group began their career in 1972 when they released the single "Santa Dog", so the stage reflected a demented holiday theme throughout. I felt like a more intimate setting would have benefited their performance, as stated earlier, but I had a really good time, and the music was truly tremendous. I don't know how long they'll be able to continue to tour, given the realities of aging and the economic difficulties that touring bands face, particularly bands that appeal to a niche audience. I know I will never pass up the chance to see them! If this 40th tour serves as their swan song, I'll be happy with what I saw. Hopefully they'll keep touring though. If they do, check them out!


Here's a brief clip I grabbed from my cell phone:

Photographer Samir Abidy took some really nice photos of an earlier date in the tour, check them out here.

A couple of tracks to check out, if you've not heard The Residents before. Be warned: it's far out, and not for the weak.

Email ThisBlogThis!Share to TwitterShare to FacebookShare to Pinterest
Labels: concerts, music, The Residents