Pizza and Video Games: God of Blades, Curiosity and Pitfall!

I am not particularly fond of gaming on the iPhone. I also don't own, and don't really have a desire to own, an iPad. I keep hearing about how it's a key gaming platform nowadays, but I have yet to play very many games that are fun on it. Maybe I'm just not playing the right games? So far some of the best experiences have been asynchronous word games like Letterpress, when playing with friends, although I hear there are some good adventure games to be had as well.

Oh, and I find Angry Birds to be tedious and not fun at all. Sorry! :)

That said, I do enjoy the relatively indie nature of a lot of App Store development. Small teams with grand plans, tiny budgets, and a penchant for long workdays pour their passion into a product that tends to either be completely ignored or make everyone involved a pretty significant amount of money! There's a lot of pricing pressure being put on the console-makers as well, and that's not a bad thing, either.

It's been said a million times, but it's true: iPhone and iPad gaming works best when you don't have traditional keypads and jump buttons. That's why simple swipe-based gameplay and asynchronous word games tend to be the most successful, at least so far. Fighting some kind of cruddy virtual keyboard just isn't fun! They are different experiences, and require a different approach.

Here's a couple of games that have been in heavy rotation on my phone in recent months: 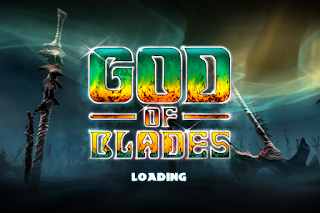 God of Blades oozes late 70's prog-rock album cover greatness: burly warriors wield swords with funny names and cut down all who dare to stand in their path. This is a game that only semi-ironically uses words like, "Through the Ancient Seas of Space and Time" and "...wielding Foe-Cleaver the Destroyer." The backgrounds are like something out of Heavy Metal Magazine. This game features groovy sci-fi acid trip backgrounds, synth-based music, steady and challenging combat and epic boss battles. If you've ever listened to metal, played Dungeons & Dragons, or picked up a prog rock album just for its cover, you'll love this game!

The gameplay itself is quite simple: Swipe across a portion of the screen to do one of several attacks (or parries) and time your swipes to dodge oncoming attacks. Each sword you use has special abilities and attacks, and falls into a classification of light, medium or heavy, each with its own benefits and drawbacks. I preferred to use a light sword throughout; when I switched to heavy, I'd be too slow to respond.

One of the more chuckle-worthy aspects of this game is a function called Loreseeker. You unlock up to ten swords while playing the game; about half of them are unlocked through a basic leveling mechanic, while the others require you to visit a public library! It's a terrific concept, but unfortunately it never functioned for me. The game theoretically uses Foursquare on your iPhone to tell when you are in a public library: hit a button and get a sword! In practice, though, I'd get stuck on a loading screen every time I tried it, and despite several attempts, was never able to use the Loreseeker function successfully. 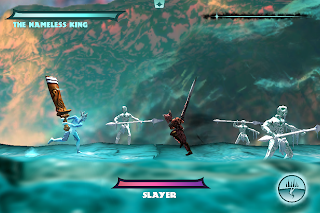 There are three available gameplay modes: a Campaign mode which gives you the main story progression, an Eternal mode which is a score-based survival game, and a recently-added Revenant mode, which allows you to play asynchronously with friends and craft your own armor and helmet!

The game itself is quite fun, and has a lot of great atmosphere. If you enjoy the setting, you'll love the game. Additionally, White Whale has released a PC "sister" version of this game called Slayers recently. It's similar to the iPhone version, but ditches the story in favor of two-player competition. Also cool!

Pros: Simple yet creative. Philosophical. Gets you thinking about the nature of gameplay.
Cons: This is a game in theory, but is more of an activity in practice. Load time on startup is a bit too long for a game that works best as a got-a-couple-minutes-to-kill distraction.

It's not entirely fair to describe Curiosity as, "virtual bubble wrap with a store mechanic", but I'll do it anyway. :) That said, Curiosity is also an interesting philosophical exercise that gets you thinking about what it means to be a game. You'll also thinking about the nature of shared virtual experiences and artistic design. Additionally, through all that clicking, you'll hold out hope that you are "the one."

According to 22 Cans head Peter Molyneux (who's a famous game designer in his own right), only one person will truly get to experience the answer of, "What's in the Cube?" Allegedly, the core of the cube contains some kind of link to a something-or-other, and only one person will get to see it by clicking on the final square. For everyone else, we've been pressing our fingers to pop little colored squares over and over and over and over again for months for...why, exactly? To see the next layer of the cube? To earn points which we spend on virtual items that have an in-game effect, like bombs that explode a bunch of squares at a time? Because it's strangely satisfying to burst little squares and get points for it? Unsure. Thing is, Curiosity is engrossing. It's a very ambient experience, and the kind of mindless distraction that is appealing as a "waiting in line" app.

It's hard to say that Curiosity is a game. I know, I know: Art is Art because someone says it is, so a Game is a Game because someone says it is. I prefer to think of Curiosity as more of an activity than a game, although part of the game's genius is that it gets you thinking about the nature of game design even while you're popping little squares for twenty minutes.

I love that 22 Cans is doing something different, and is promising to make a whole bunch of unusual and creative games/activities in the coming years. Curiosity is also free, with some minor micro-transactions and a few links in the store to other products available by the company. It's a very pure in-app experience, though, and is highly recommended for anyone interested in game design or artistic virtual interactivity.

One of the things I like best about Curiosity is that it sits pretty far on one end of a line between Art and Commerce. On nearly the exact opposite end is... 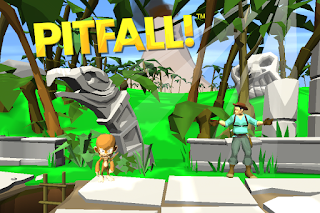 Pitfall! was released to mark the 30th anniversary of the classic Atari 2600 game Pitfall! Pitfall! is one of my personal old-school favorites, and I'm sure I'm not alone. There's something about the color theme of Pitfall! that just screams Retro Art, and the game back in the day really was fun to play. It's a great example of a certain era of gaming. Activision's new re-imagination of Pitfall! also fits perfectly with modern iPhone and iPad gaming. Unfortunately, that's not always a good thing...

Like many iPhone games, Pitfall! is free. If a game isn't free on the App Store, it can be very hard to find. At all. It's a strange world right now in that in order to be successful on the App Store, you need to be either free or so close to it that you better not be spending much on development costs. Unless you are successful, particularly with getting people to give you money after they've downloaded your game, but success can be hard to predict. This is a long-term issue for game developers hoping to succeed on the platform, and is something Apple just hasn't done enough to address.

Since it's free, the game needs to be supported by micro-transactions. In this case, that means a lot of in-your-face advertising, promotional pop-ups while playing, near-constant encouragement to spend virtual coins on virtual goods and power-ups, even sound-based notifications sent to your phone's screen. Frankly, it gets old after a while, and distracts from the gameplay. After a while, you start to wonder whether the "game" part of the game is even important. Like a casino offering a free buffet, is Activision simply cashing in on early 80's video game nostalgia and releasing a bit of "heck it's just a buck" sucker bait?

The game is one of a huge number of games described as "runners": you don't move your character; rather, the movement is done for you, and you instead swipe and press buttons to jump, grab, crack your whip, and perform other basic actions. You're running away from an exploding volcano, collecting rows of diamonds, attacking snakes, jumping across gaps in your path, ducking under fallen trees, etc. It's very easy to pick up and play, and is a real strong point of the game. Unfortunately, when the swiping doesn't work, for whatever reason, you die. Game Over. Unless you've spent virtual coins on continue tokens, it's back to the start with you. It's hard to criticize a free game for occasional control issues, but it does get annoying when it happens.

The music is decent, the graphics are colorful, the voice work is cute (if a little repetitive), and there's even the chance to level up and buy a few things without spending money. It's good enough! I have to admit that one of the biggest reasons I keep this game on my phone is that my 16-month-old likes watching Pitfall Harry run. I realize that screen time's bad, but I'm sure I'm not the only Dad out there who keeps an app or two for child-distraction purposes... :)

I can't say that Pitfall! is better than the hundreds of other running games out there on the App Store. But - if you're looking for free, this is an option, and it's all right!