Descending into the madness that was PAX East 2013:


I had a great time at this year's PAX East. For those who don't know, PAX East is a growing yearly convention in Boston centered on gamer culture - mostly video games, but also board games, card games and podcasts/media. It's tens of thousands of people in the Boston Convention Center, geeking out and having a fun time. It really is great!

PAX East is great affirmation that there are a ton of gamers, geeks and nerds out there, both male and female. The organizers of the expo, the folks who do Penny-Arcade.com, have put together a real celebration of gamer culture. I was thinking about this the other day: If you are a parent of a teen who's struggling due to popularity/bullying issues in middle or high school, this kind of convention is a great way for that person to both have fun and to realize that there's a lot of people like him/her, the issues they are struggling with now will not last forever, and when they get a bit older they can really have a community to call their own.


That's not to say that PAX East is perfect: The crowds can get really claustrophobic due to space issues, particularly in the halls and exhibit hall floor. Additionally, since there is no ticketing system for the presentations, speeches, and podcast recordings, it's first come, first served. What THAT means is literally a 2-4 hour-long wait to try to get in, and even then, there's no guarantee that you'll be able to enter. For me, that frustration was really stressful, so I soon learned to simply not attempt to attend any of the presentations. They are almost all great, but until there's a way for people to actually attend them without fighting for hours in a line, I'm out. On the plus side, almost all of the podcasts are recorded (and many are now uploaded to YouTube), so you don't miss out. I sure wish I could have seen the Giant Bomb, IGN, and Retronauts panels, though... :(

I did see quite a few good games at this year's show. Per usual, the big players brought out their big guns: huge promotional displays for upcoming games, tie-ins with streaming web sites that included interviews, competitions, giveaways, and more. Gamer tech was well represented this year as well, with Sennheiser showing off some truly great-sounding and great-looking headphones and headsets, along with Turtle Beach, who have really, really good-looking headsets (albeit totally overpriced.)

One of the best things about PAX East is its support for "indie" game development. There were dozens of small game developers looking to get their big break. This year, in my opinion, was the year of the Indie: there were tons of creative and good-looking titles, many for iPad, iPhone, and the Playstation Vita (a personal interest of mine.)

Here are three that I wanted to talk about in particular:

Legend of Dungeon virtually screams "retro gamers unite!" This game does a few things that set it apart from the ever-growing field of nostalgia-based platformers and puzzlers. It's a four player online co-op game that plays a bit like the classic dungeon-crawler Gauntlet. The game's dungeons and music are randomly-generated, so every time you play it, things are a bit different. The randomly-generated music is a really cool idea, in particular.

Basically, you and your friends work to reach the furthest depths of the dungeon, grab the treasure, and get out. You'll button-mash your way through tons of different monsters, get lost, find traps, and do a bit of light puzzle-solving. It's a really fun game, and really stood out as a creative and unique effort by a mostly husband-and-wife team called Robot Loves Kitty, based in New England. On the show floor they had the game running with four retro NES-style USB controllers, which I'd recommend if you have them. You can purchase an "almost Beta" version of the game on their web site here.

Tengami is a casual puzzle game where you explore Japanese papercraft-inspired environments and interact with various creatures. It's a very unique, meditative, and slow-paced experience, with great music. This was one of the highlights of PAX East for me.

This game is mostly designed for the iPad, but will also be available for the iPhone. The person who staffed the booth, who I am pretty sure was one of the developers, said they also had plans to release the game for PC and Mac. I suspect that playing on a phone would be inferior, mostly because you'd miss out on seeing the detail of the environments, and the PC/Mac might be inferior due to the game's controls being touch-screen based. Still, if you don't have an iPad (like me), the alternative versions are welcome.

The game is developed by the small UK-based development team called Nyamyam. You can find their web site, which includes some cool blog posts about developing the game, here. Tengami is expected to be released later this summer. 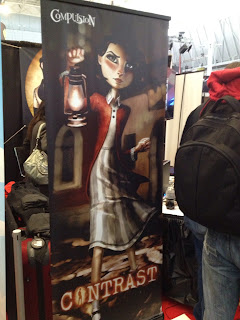 Contrast appeared to be one of the more popular games in the Indie section of PAX East, and I suspect part of the reason for that is its striking art style. This game just oozes cartoon-like creativity. This game features distorted worlds and characters, and centers on the mining the creative depths of classic magic shows, cabaret acts, jazz, and the stage.

I have to admit that I didn't get the chance to sit down and play this game due to the length of the lines, but it seems to be part of a growing niche of adventure/puzzle games in which the lighting becomes a physical part of the environment. Similar in some ways to games like Lost in Shadow, Limbo, and Closure, you manipulate the environment to provide the means for the character to progress through the story. The visuals and sound really set this one apart: It didn't look like anything I'd ever seen before, and was really cool.


As usual, if I wasn't in the exhibit hall area looking at games and doing a bit of window-shopping, or in the board game area, I was probably in the American Classic Arcade Museum's free play arcade. This is a real highlight of the show if you've ever been into arcades, since it features several dozen fully-restored games set completely free to play.

Since the company I work for wasn't showing anything this year, it gave me the chance to explore a bit more than usual, which was nice. Still, it's really fun to show there, so hopefully next year!

Did you go to PAX East this year? Tell me about your experience in the comments section below!