I Saw A Concert: Goblin and Secret Chiefs 3

Live at The Sinclair in Boston October 9th, 2013 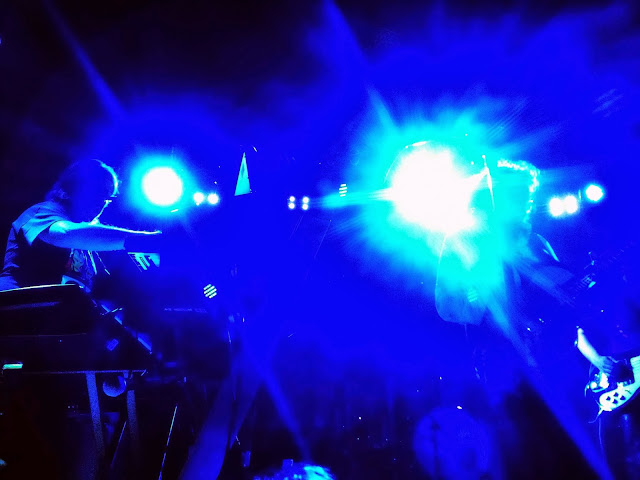 Few bands in the world can effectively pull off the kind of heavy, groovy, and all-out spooky sounds that Goblin can. For more than forty years, Goblin have been providing soundtracks to some of the coolest horror films out there: Like Air and "The Virgin Suicides" or Mike Oldfield and "The Exorcist", the soundtracks they've created have become such an integral part of the films they inhabit that they are utterly inseparable. Goblin enjoyed a long and fruitful relationship in particular with shock horror master Dario Argento, and provided precisely the right (and weird) music that fueled Argento's violent-but-trippy movies like "Suspiria", "Tenebre", "Phenomena" and more. Goblin also wrote great soundtrack music to numerous thriller, "Giallo" detective, and other genres of film throughout their career. The group's heyday was largely in the 1970's and 80's, although the band continued to make excellent new music well into the new millennium.

Thing is, I never thought I'd get to see them.
They simply never toured the United States! No exaggeration, either: This month brought them on tour to the U.S. for the first time ever in their career. Despite being around in various incarnations for decades, they simply stayed in Europe and Asia, having for some reason believed that there just wasn't enough of an audience to support a U.S. tour. Which is strange, since their music and merchandise has long come at a steep price at various gaming, comic book, and movie conventions. Simply finding their albums used to be a challenge (prior to the explosion of the Internet and the rise of services like Spotify.) I guess no one bothered to tell them? :) Either way, word is they were convinced to play a show in Austin, and it sold out so quickly they began making other dates, which too sold out very quickly, prompting them to expand into a full-fledged tour.

I flipped out the day at work that I heard they were coming not just to the U.S. but to Boston. It's one of the few times I literally jumped from my chair. Along with Frank Zappa, Captain Beefheart, and a few others, I thought Goblin would be a band I'd love my whole life without ever getting the opportunity to see them live. The "main" members of the group (they've been through quite a few incarnations) are most likely into their 50's (at least), and since they'd never toured the U.S., I though that was that. Cross this one off the bucket list!

The Sinclair is a cool venue, not too big but with an open lower level and comfortable upper level that features some tables and even a few steps to provide everyone with a good view of the stage. The sound was loud but pretty good, and the prices of drinks were about what you'd expect for a club in Boston.

The merch table was really great! I wish they would have taken credit cards, as I probably would have given them way too much money...as it was, I managed to pick up a t-shirt.

Opening for Goblin was a group I'd kind of heard of but not really listened to called Secret Chiefs 3. I wish I'd heard their music earlier! They were right up my alley, having worked with both Mr. Bungle and Faith No More (they were led by guitarist Trey Spruance.) In many ways they sounded quite a bit like their collaborative works with Mike Patton, but provided instrumental music that shifted from surf rock to heavy rock to various eastern and middle eastern-themed compositions. Really, really cool! They were super-tight, and were obviously highly-skilled musicians.


Goblin took the stage with a fun and totally-appropriate routine provided by an Italian dancer dressed like a zombie. :) They flat-out rocked the stage, and tended to focus on their heavier material, although their more dance-y and atmospheric songs also made an appearance. Despite the time that has passed since these songs were written, they still played them with a lot of energy and precision.

They looked like they were having genuine fun on stage, and appeared to be thrilled with the raucous and excited crowd that packed the show. Several times, I saw members pull out cameras to take pictures of the crowd, and you could just tell that they appreciated the audience being there.

One thing that was particularly cool about the show is that they offered maybe a hundred or so VIP tickets that sold out quickly. I got one of them! What the VIP ticket did was allow a group of us to get into the show early and see part of Goblin's sound check. They then were gracious enough to sit at a table to shake hands, talk, and sign various memorabilia brought by us uber-fans. They were very friendly and accommodating, and it it really made the night special. All of us VIP ticket-holders got a special tour poster as well, which I plan to frame as soon as I am able to. Got it signed!

I was originally going to make it a two-night extravaganza, since the day after I got Goblin tickets one of the other major "bucket list" bands of mine, Hawkwind, announced a show in Boston for the next day! Unfortunately, Hawkwind postponed their show over the weekend due to a band member's illness, so hopefully I'll be able to see them in March.

For those who haven't heard Goblin before, here's a quick primer on them in Spotify playlist form:

Like Goblin? What's your favorite Goblin soundtrack? Have you seen a great show yourself recently? Let me know in the comments section below! 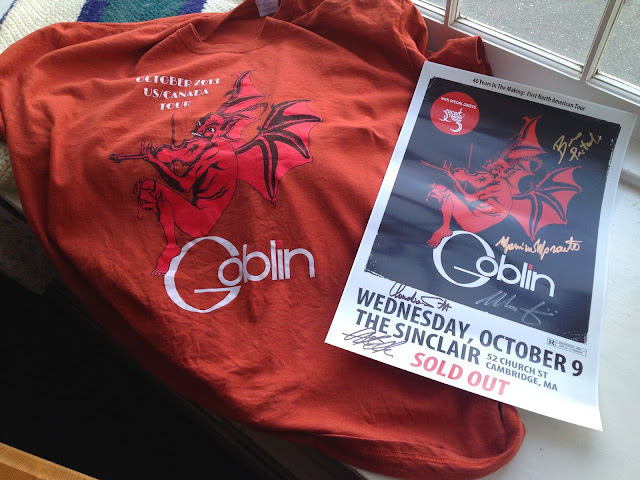